Know before you go

Catch breathtaking views of Mount Everest, Lhotse, Nuptse, Thamserku, Ama Dablam, Nuptse, Cho Oyu, Lhotse and associated pea
Hike through the Sagarmatha National Park, a UNESCO World Heritage Site.
Pay a visit to the most famed Tengboche Monastery of Everest region.
Enjoy the stunning views of Khumbu glacier and Khumbu icefall.
Hike to Kala Patthar (5,555 m) & Nangkartshang Peak (5,083 m).
Revel in splendid sunrise and sunset views over the mountains.
Trek to the base of the world’s tallest peak, Everest Base Camp. Have a spectacular flight to and from Lukla.
Gain insight into the diverse flora and fauna of Khumbu region.
Visit Sherpa Culture Museum in Namche Bazar.
Get to know the unique Sherpa culture and tradition.

While climbing the highest mountain in the world, Mount Everest, requires immense effort, skill and time, getting to the base camp is quite a bit easier and less time consuming, however for those on a really tight schedule, Accessible Adventures has come up with the Everest Base Camp Heli-Trek that shortens the duration of a regular EBC trek down to only 12 days without compromising on the Himalayan experience. There is also plenty of time allotted for acclimatization and exploration.

Through a chartered helicopter flight from Kathmandu to Lukla, you will be able to view the many hills and mountains from the east of Nepal from the sky and be able to see the Kathmandu valley as well as numerous small villages and towns scattered throughout Nepal.

From Lukla, officially begins, walking through dense forests of pine and rhododendrons in a preserved area known as the Sagarmatha National Park. Numerous small villages dot the trek to the land of the sherpa, Namche Bazaar, the gateway to Everest.

Spending around two nights at Namche Bazaar for acclimatization purposes, we will hike around the area, to get  the body accustomed to the low amounts of oxygen. Namche Bazaar itself has numerous locations of interest that will have you occupied and fascinated for the two days. We take the classic the classic route from here to Everest base camp via Tengboche, Dingboche, Lobuche and Gorekshep.

At Dingboche village we will also be spending two nights while climbing the nearby smaller mountains in the region. The view from the small village of Dingboche is indeed amazing and the medieval stone walls built around the village centuries will make your imagination travel to the past.

Moving further to Kalapathhar which lies at a massive altitude of 5500m and the Everest base camp. The view of Mount Everest and surrounding mountains like Lhotse, Nuptse and Ama Dablam are absolutely stunning.  Reaching the starting point to climbing Everest is an accomplishment on its own and after taking pictures and taking in the view, we make our way back to Gorakshep where a chartered helicopter awaits.

Rather than walking back to catch a flight from Lukla, the helicopter journey gives you the opportunity to explore the Everest region from the sky and be able to see the Mahalangur mountains face to face. The helicopter ride has been reviewed by many to be one of the best experiences of their life. This also saves quite a few days of trekking and exhaustion.

Spending the night in Lukla, relaxing after the journey you just took, the morning flight back to Kathmandu will mark the end of the trek.

As you reach Kathmandu at Tribhuwan International Airport, our airport representative from Nepal Accessible Adventure will welcome you and also give brief information on the further programs. As we will not have any planned activities for the day, you can simply relax after checking into the hotel. Overnight at the hotel

From Kathmandu, we will fly to Lukla experiencing an awesome flight. The landing field at Lukla is at high altitude and the difference between the two ends of the airstrip is approximately 60 meters only. From Lukla, we will trek to Phakding passing a fascinating, green setting along with the breathtaking sight of Kusum Kangraru. Overnight at Guesthouse, breakfast, lunch and dinner included.

After having breakfast in Phakding, we trek along the banks of the Dudh Koshi River crossing suspension bridges en route. Hereafter we hike through a beautiful pine forest towards the entrance of Sagarmatha National Park for a brief permit check. Then, we continue trek in Namche trails, climbing steeply upward beholding the sights of sacred mani stones, colorful prayer flags, raging glacial rivers and beautiful mountains. The Everest Base Camp short trek for today comes to close as you reach Namche Bazaar, the beautiful sherpa town where we stay overnight at a guest house there. Breakfast, lunch and dinner included.

Namche Bazar is the first acclimatization spot en route to Everest Base Camp. This popular mountain town is a busy trading hub of native Sherpa people where you can shop mountain gears and clothes, buy local handicrafts, find hotels, guest houses, and visit museums and many more. We spend acclimatization day in Namche Bazaar. We visit Sherpa Cultural Museum to explore the history and culture of the Sherpa people and their unique traditions and customs. Even more, we hike up to Syangboche Airport (the highest altitude airport of Nepal) and Hotel Everest View, the highest placed hotel in the world at 13,000 feet. This place offers astounding views of Mt Everest, Nuptse, Lhotse, Ama Dablam and neighboring mountain peaks. Overnight at a guesthouse Breakfast, lunch and dinner included.

We will ascend to Tengboche lying at the elevation of 3860m after departing from Namche Bazaar. Experiencing easy walk, we will witness the view of Mount Everest on the way. Also, we will descend deep to the Dudh Koshi Valley lying at Pungki Thanka. Moving ahead from right side of the Dudh Koshi valley we will ultimately reach Tengboche Monastery (3860m). Here the striking views of Mt Amadablam, Mt. Everest and its adjacent peaks will completely allure you. Overnight at Guesthouse, breakfast, lunch and dinner included.

Today we trek through trails through coniferous forest to Deboche. From there, we pass suspension bridge over Imja Khola river and climb uphill towards Pangboche village. From there, we follow the trails towards the Imja Valley, Lobuche River and finally ascent to quaint traditional Sherpa village, Dingboche. En route, we come across colorful mani stones, prayer flags and breathtaking view of Lhotse, Island Peak, and Ama Dablam. Overnight at a guesthouse Breakfast, lunch and dinner included.

This is another acclimatization day in Dingboche to get used to with the higher elevation. We will also hike to Nagerjun (5100m), a hill situated above Dingboche on the edges of the Chhukung valley. While walking on the way the trail becomes steep on occasions making the walk challenging. From Nagerjun, we will witness the fine views of Lobuche East (6119m), Thamserku (6608m), Kangtega (6685m), Lobuche West (6145m), Taboche Peak (6367m), Ama Dablam (6856m) etc. You may also witness the world’s fifth highest mountain, Makalu on a clear day. We will then walk back to Dingboche. Overnight at Guesthouse, breakfast, lunch and dinner included.

The trail gradually goes uphill to Dughla offering stunning view of Tawachee and Cholatse. As you pass through trail, we come across the lateral moraine of the Khumbu Glacier. En route, we observe the stone memorials with prayer flags built in the memory of perished climbers. Then, we trek towards Lobuche village; from here we observe a close view of mountain peaks like Nuptse, Lobuche and Pumori. Overnight at a guesthouse Breakfast, lunch and dinner included

This is the 9th day of the trek and is one of the most important days of the trek. We will experience a short way up through meadows, and then walk down at the Khumbu glacier. Also, we can notice the best vantage point Kala Pathar from where stunning sights of the entire southern face of Mt. Everest as well as the adjoining peaks can be seen. We will get to Gorekshep, walk for some hours from Lobuche from where we will make way to the Everest base camp. We will have to walk on a rising and falling path to get to the base camp and witness a splendid view of the Khumbu icefall. The views from Everest Base Camp will totally enthrall you overnight at Guesthouse, with breakfast, lunch and dinner included.

Wake up early and hike to Kala Patthar. One of the highest and most popular viewpoints in Everest Region, Kala Patthar offers 360-degree views of Himalayan Peaks including Mount Everest. The view is spectacular and not to be missed. Stand close to Pumori, Nuptse, Changtse and Mount Everest, some of the tallest peaks in the world, and watch this incredible spectacle. This sight is one of those precious views that will remain with you forever! Take pictures and head down to Gorak Shep again. From Gorak Shep, board a helicopter and fly to Lukla. You thank your support crew and bid farewell them. Once aboard, enjoy aerial views of some of the most beautiful sights in the planet. Hover above the mighty peaks and the rolling Khumbu and Nzogumpa glaciers. There will be a brief stopover at Lukla before you fly onward to Kathmandu. This is the final leg of your journey and you bid adieu to the beautiful Khumbu mountains. Before you land in Kathmandu you will be able to enjoy a bird's eye view of Kathmandu valley. From the airport you will be driven to your hotel. Check in and take rest or explore Thamel. Evening attend farewell dinner hosted by us. Celebrate the completion of your amazing luxury trip with good food and wine. Overnight in Kathmandu Accommodation: Hotel Meal Included: Breakfast

If you don't have other schedules fixed in Nepal, you might be leaving today. We will provide an airport drop for your scheduled flight back home and wish you a safe flight back home. We are sure the Everest Base Camp Heli trek has left you to determine to come to Nepal again to explore its more beautiful landscapes in the future.

Lunch and dinner while in Kathmandu and during the trek in the mountains
Travel insurance which covers emergency Rescue and Evacuation
International airfare and airport departure tax
Nepal entry visa; you can obtain a visa easily upon your arrival at Tribhuwan International Airport in Kathmandu. (Tourist Visa with Multiple Entries for 15 days can be obtained by paying US $ 30 or equivalent foreign currency. Similarly, Tourist Visa with Multiple Entries for 30 days and 90 days can be obtained by paying US $50 and $ 125 respectively. Please bring 2 copies of passport size photos)
Alcoholic, hot and cold drinks
Personal trekking equipment (You can hire sleeping bag and down jacket from us at USD 25 per item for the duration of the trek.)
Tips for trekking staff and driver (Tipping is expected.)
Any others expenses which are not mentioned on 'Price Includes' section
Departure Dates
Departure Dates
Reviews 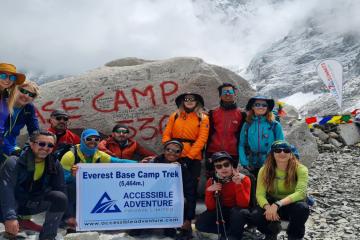 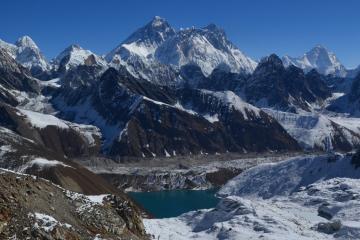 Everest Base Camp with three passes 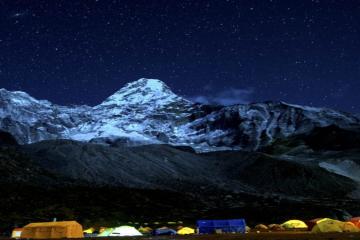 Everest Base Camp Trek with Overnight at Base Camp