Mt. Kanchenjunga lies at the easternmost north end of Nepal bordering Sikkim in India. The mountain itself was considered to be the highest mountain in the world until it was superseded by mount Everest in 1852, now it occupies the position of the third highest mountain in the world. The region itself is extremely diverse in terms of flora and fauna and the ethnic groups that inhabit the region has a culture going back thousands of years. Most of the mountain itself lies directly on the border between India and Nepal but the greater Kanchenjunga region within Nepal has the western peaks of the mountain in the Taplejung district of Nepal.

Due to the summer-monsoon rainfall that occurs in the region the foothills are green and lush with a diverse group of fauna inhabiting the region. Breathtaking mountain vistas with colourful flowering meadows make this region a must for those seeking something to soothe their very soul.

The Tamur and Ghunsa rivers found to the west of the Kanchenjunga mountain originate from icy glaciers that populate the mountains. Almost every direction has a breathtaking view if the mountains which are rugged and quite difficult to traverse. Other snowy peaks such as the Pyramid peak, Jannu, the aptly named Twins make for addicting views that are sure to keep you captivated and mesmerized. n the southern return journey through the area famous Mirgin La pass waits at an altitude of 4500m

The region itself is rarely visited due to the physical fitness and prowess needed to trek through the region but adventure and thrill seekers who need a bit of a challenge to get their blood pumping will find this region to be heaven on earth.

The Rai, Limbu and Magar communities populate this region. Their largely animistic and shamanistic culture based around seasonal variation. Their festivals of Udhauli-Ubhauli involves the story of migration from the high hilly areas to the foothills during the winter and the ascent upwards during summer. Their religious scripture is called the ‘Kirat ko Ved” in Nepali or Mundum which involves the praise and admiration of the great Sky God and Mother Earth. Their folk dances and music is one of a kind seen almost no where else.

As such the region is virtually untouched and those looking for an authentic natural experience in the mountains away from the troubles of civilization will find the Kanchenjunga region worth visiting. 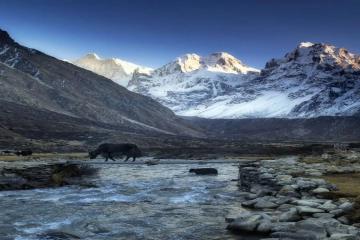 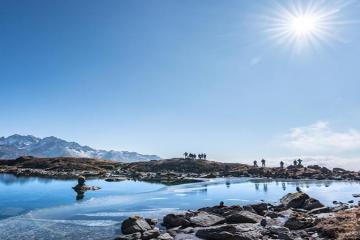