Nepal, which is generally recognized as a destination for mountain travel, is also home to a secret treasure that the majority of visitors are unaware of until after they have arrived. The lowlands of southern Nepal, known as the Terai, are covered in verdant forests that range from tropical to temperate, and they are home to an astonishing variety of flora and animals. A significant portion of these forests is now protected and preserved as parts of national parks and wildlife reserves.

National Parks such as Chitwan, Bardiya, Parsa, and Shuklaphanta are open for exploration, and visitors have the option of doing so either atop the backs of well-trained Asian elephants or in more traditional four-wheel-drive jeeps. Although there are many additional national parks available for exploration, the following four are the ones that receive the most visitors.

There are as many as 30 different endangered animals that call Nepal their home, including tigers, rhinos, red pandas, snow leopards, and more. The population of many of these species has increased in Nepal as a direct result of the country's policies on conservation initiatives, anti-poaching measures, and hunting restrictions. Nepal is on track to become the first country in the world to practically double its number of tigers from an all-time low of 121 individuals. A tale not dissimilar to this one can be told about the one-horned rhinoceros.

Chitwan National Park is the most well-known destination for jungle safaris in Nepal. This park can be found in the districts of Chitwan and Parsa, and it spans a total area of 952 square kilometers. The primary entrance to the park can be found in Sauraha, which is situated in Chitwan and is only a few kilometers away from Narayangardh, the largest city in the region. Founded in the year 1973 AD, this region is made up of Sal forests and grasslands. Large mammals such as the Royal Bengal Tiger, the one-horned Rhinocerous, Asian Elephants, and many types of Deer can be seen residing in the national park in which the park is located. There are about fifty different species of mammals, 525 different species of birds, and over fifty different kinds of reptiles and amphibians. The infamous Gharial Crocodile can be found in the Rapti River, which runs through the middle of the park. Because of the harsh winters, several migrating birds, some of which come all the way from Serbia, have found refuge here.

In close proximity to the national park is the well-known Elephant Breeding Centre, where you will be greeted by young elephants. Additionally, canoeing along the Rapti river will bring you face to face with crocodiles. Both of these activities are highly recommended. A trip to the adjacent turtle and gharial breeding centers can also be arranged, provided that sufficient time is available.

Following your adventure in the jungle, you will be captivated as you go through the communities of the indigenous Tharu community and learn about their culture. The Tharu people have a variety of cultural dances that each reflect a different event or activity that is all centered around nature worship and remaining close to the forest. These dances may be found in their villages.

Chitwan National Park, which was once used as a hunting area for members of Nepal's ruling elite in the 19th century and is now one of the most protected settings in Nepal, is a haven for people who are passionate about nature.

Bardiya National Park is a protected area that encompasses a total area of 968 square kilometers and can be found in the Bardiya district in the far western part of Nepal. It is home to hundreds of different species of flora and animals. Due to the fact that it is Nepal's largest national park, it is certain to provide you with an incredible experience of going on a jungle safari.

In total, Bardia is home to over 839 kinds of plant life and approximately 642 types of animal life. There are over 125 different kinds of fish and 23 different species of reptiles and amphibians that call this region home thanks to the Karnali river system and its tributaries that flow through it. There are approximately 407 different kinds of birds that seek refuge in the sal forests of Bardiya, including peacocks, white-rumped vultures, and bar-headed geese. Those who enjoy watching birds may find their hobby to be especially gratifying in Bardiya due to the fact that it is home to the greatest diversity of avian species in all of Nepal, including migratory birds.

The Barasinghe deer, whose name literally translates to "one with 12 horns," is a magnificently beautiful animal known for its incredible branching antlers. You'll be greeted by Gangetic dolphins, which are river dolphins that live in fresh water, as you make your journey down the Karnali-Babai river system, which is located within the park, and you'll see crocodiles sunning themselves along the river bank. You may also get the opportunity to spot rare leopards, sloths, hyenas, musk deer, and other animals.

A true one-of-a-kind jungle safari experience can be had at Baardiya, which features approximately 70 percent forest covering and the remaining 30 percent made up of a mixture of grassland and water. 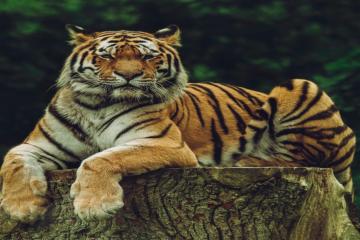 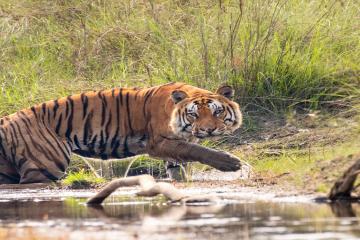