Kathmandu’s Hindu pilgrimage sites are legendary and famous worldwide. It is one of the spiritual centers for Hindus in the world. Numerous temples dedicated to the worship of various deities like Vishnu and Shiva and Shaktis are found in Kathmandu. Ancient temples mentioned in numerous scriptures like the Puranas and Itihasa are found here. The Pashupatinath temple is one of the oldest Shiva temples. Budanilakantha temple has a legendary origin story and houses a very articulate statue of lord Vishnu reclining on the Seshanaga. Many tantric divinities are also worshipped in Kathmandu as the valley is one of the only remaining tantric Hindu regions in the world.

While on a Hindu pilgrimage trip in Nepal, you will be captivated by the stunning places that are significant not only to Nepalese but also to Hindu pilgrims from all over the world. Similarly, because there is no high altitude arduous trek required, a Hindu pilgrimage tour in Nepal may be attended by everyone, regardless of age or fitness level.

Pashupatinath is the one of world's most important Hindu shrines, and the temple itself is the largest Hindu temple dedicated to Lord Shiva, located on the banks of the Bagmati River. Almost every Hindu pilgrim would want to prostrate themselves in front of the Pashupatinath shrine at least once in their life. The major features around Pashupatinath are the cremation sites on the banks of the Bagmati river where most Hindus are cremated after death, neighboring jungle is protected and considered magical and holy. The temple has already been designated a UNESCO World Heritage Site. The Pashupatinath temple has been and is continued to be visited by a huge number of worshippers, including national and international celebrities and delegations.

Just a kilometer away from Pashupatinath is the Temple dedicated to Guyeshwari the secret Tantric form of Parvati and Shakti. Guhyekali is another name for the deity present in the shrine. It is a popular pilgrimage site for both mainstream Hindus and Tantric devotees. The name of the temple is derived from the Sanskrit words Guhya (Secret) and Ishwari (Goddess). The temple is also recognized as one of the most significant venues for attaining tantric power in the holy writings of Kali tantra, Chandi tantra, and Shiva tantra Rahasya. The temple was built during the reign of King Shanker Dev of the Lichhavi era with the assistance of Tantric Narasingha Thakur. King Pratap Malla then restored the temple in 1654 AD with the guidance of famed Tantric Lambakarna Bhatta.

Narayanan temple, also known as Budhanilkantha temple, is a famous shrine of Lord Vishnu located on Kathmandu's northern outskirts. We arrive at Budhanilkantha temple after a short journey towards the base of Shivapuri hill, where we may worship the sleeping statue of Lord Narayan (Vishnu) in a little pond, which is 5 meters long. It is believed that a farmer plowing in the area discovered the statue after striking it with his plough and causing it to bleed.

Buddhists and Hindus alike revere the lord Buddha in Nepal and one of the most important Buddhist shrines in Kathmandu, the Swayambhunath houses a stupa thought to have originated when the lake of Kathmandu was drained by Manjushri. The Tantric shrines of the Shakti, known locally as Hariti is also found in Swayambhunath. Dubbed the Monkey temple, the temple is a homage to the religious harmony and respect present in Nepal.

The day Hindu pilgrimage tour in Kathmandu can be undertaken in any season. The best seasons would be Spring and Autumn as temperatures in the valley are not too hot or cold, Monsoon will see heavy rains making for a slightly messy tour.

We are easy to work with, flexible, and will meet all of your requirements. Furthermore, Accessible Adventures owns a hotel in Kathmandu where we can tailor rooms to your specific need.

You will be escorted around by professional local guides who have first-hand knowledge of the area you are visiting and will give you personalized recommendations and advice on local 'must-sees' and 'must-visits' that are not listed in guidebooks. Local history and culture, as well as religious aspects, will be divulged to you by our guides.

You will be picked up via private vehicle in at your hotel in the morning. Then we begin our full-day sightseeing trip with a visit to the temple of Swayambhunath present on a hilltop. You will have to climb a few stairs amid monkeys skating down the bars present. The main stupa present has images of the five buddhas and there are temples dedicated to Hariti and Rama also. There is a tantric Buddhist Shrine of Shantipur in Swayambhunath also closed off to anyone who is not initiated.

We grab lunch where you please and then move towards the north of Kathmandu towards Budanilakantha in the footsteps of the Shivapuri Mountain. Budanilakantha features a 5-meter idol of Vishnu reclining on the seshanaga in the middle of a small pond. You get to pay respects to lord Vishnu and also the various temples nearby.

After Budanilakantha begins to move to Kathmandu Durbar Square. At the center of Durbar Square lies a large statue of the tantric deity Bhairav, the wrathful form of Shiva. There are also numerous temples dedicated to Rama-Sita, Shiva, and many more.

Towards the evening we visit the  Pashupatinath temple, Lord Shiva's most important Hindu shrine. We spend time here visiting the numerous side temples in the area as well as a visit to the main Pashupatinath Shrine if you are Hindu. There are more than 100 shrines and temples in the region. Monkeys inhabit the temple and you are sure to see them interacting with the many elements around them. We also visit the cremation area, called ‘ghat’ in the local language referring to the bank of the river where cremations are carried out and the ashes of the dead are scattered in the river. Nearby is the temple of Guhyeswari where you will go next and pay homage to the tantric deity.

In the evenings, there is a ritual ceremony with fire called ‘Aarati’ in Nepali performed on the banks of the river Bagmati. The spectacle is amazingly spiritual as priests pay homage to Shiva through various chants and the usage of fire lamps. Many Nepalese come visit Pashupatinath in the evening in order to witness and participate in the Aarati ceremony. 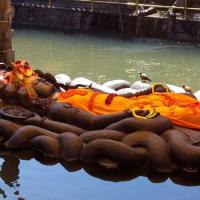 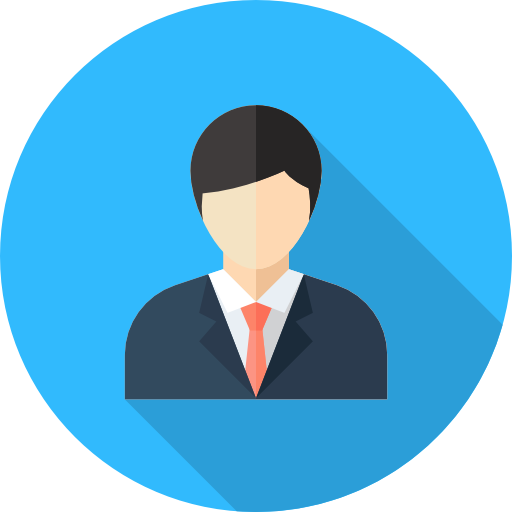 It was a pleasure coming to Nepal. I got to dive inside the  Nepali culture and the crew was really flexible and I got access with no issues. I love you all and counting my days for EBC again. One word guys, Jay Shambo!! 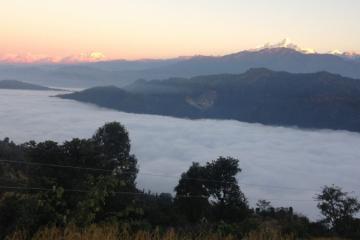 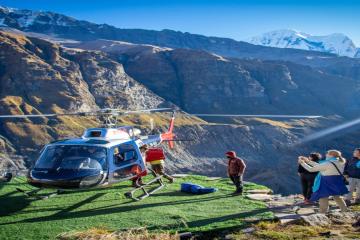 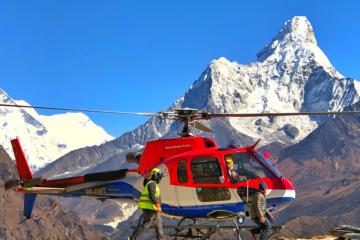